Saudi Arabia is like a living nightmare for the Saudi women. They don’t have the right to say what’s on their mind and if they did something wrong, their punishment will be hard. However, their husband or male relatives will not be punished or lightly punished if they did something wrong. This brought up the research question: What are the women’s rights in Saudi Arabia? And what are they allowed to do and what can’t they do? Women in Saudi Arabia have been fighting for their freedom forever and they’re gaining bit by bit. However, they still have a lot to accomplish to increase the world’s attention on their current status. Before I started this research project, I barely knew anything about Saudi Arabia or the people there. All I knew was women had to wear veils wherever they go. Now, I’ve learned that women are treated badly in Saudi Arabia and how hard they’re trying to change this and end this nightmare.

Many people around the world believe that men and women should be equal. In the law of Islam, in Saudi Arabia, though, men are believed to be at a higher level and status than women are. Westerners even reflected that the respect of women in Saudi Arabia is referred as ‘gender apartheid’. To the Islam laws, women are inferior subjects and they are ‘virtually slaves’ with ‘no legal rights’. Slowly, women try to change their position in Saudi Arabia. Protests such as letting women drive – Saudi Arabia is the only country where women aren’t allowed to drive – and to having an all-female rock band, which is called the AccoLade. Not so long ago, a law was formed: women don’t have the right to vote anymore. Some excuses are there isn’t enough number of female to run a station for the women only. Also from the women’s clothing can tell that how the laws are really strict on them. Saudi women (also including some other Middle East countries) have to wear a long, black cloak called the abaya over their normal clothing. In public, one has to wear a veil at all time and may not show any part of her body to a stranger, especially to a male. When women travel or go outside, she always need a male guardian with her. So the answer to my question, What are women’s rights in Saudi Arabia? And what are they allowed doing and can’t do? is that Saudi women barely having any rights at anything and they are treated very badly. Men believe that they own the women and they can do anything to them, but the women cannot complain. Saudi women also don’t have many freedom; men relatives accompany them wherever they go. I believe that one day, Saudi women will be able to end this and can finally have the rights to talk to a man by having him look at her in the eyes and earn the respects they deserve and finally wake up from this nightmare.

Recently, I just finished a book called Princess by Jean P. Sasson. I also must mention the interview I just had with the Middlee Astandis because I might repeat some things that were said in the interview.

Princess should be an award-winning book, as I might describe it. The story was told in a woman’s point of view of things and how much she wants everything to be changed. Women of Saudi Arabia were the slaves of men. They had to listen and do to whatever the men said, plus, they can’t talk back. However, Princess Sultana (a false name) was the one who thought of change in the royal family. She was the youngest girl of the family, but from a young age she had already noticed how her sisters and mother were treated by her father and brother. Princess Sultana had always wanted to earn her father’s love, but because of gender, she was always pushed aside and scowled at when her brother, Ali, was the one who was adored.

After reading this book, I believe that the women of Saudi Arabia should stand up for themselves. You need to sacrifice to win. I also think that it shouldn’t matter if you’re a female or male; people should be equal and treated the same ways. A lot of women had had better success than men. In the end of the story, when the Iraqis were invading Saudi Arabia, the American army helped the Saudi Arabians to fight them. Among the soldiers, there were women who were also in the army. The Saudi Arabian men thought that was against the God’s laws, but the women thought it was hope for them for freedom.

Do you remember this famous girl on the picture?

As you can see this picture, the girl on this picture has really strong power and especially her eyes look angry and something really special than normal people.

This picture is taken by the photographer Steve McCurry and In June 1985 this picture ran on the cover of the magazine, “National Geographic.” And the girl on the picture became known as “Afghan Girl” and for 17 years no one knew her name because for Afghan villager’s custom, women could not to tell their names to strangers. Steve McCurry said that he took this picture at the refugee camp in Pakistan.

17 years after that Steve McCurry took this picture, he revisited the Afghanistan again and he found her. And he found that the name of the girl was “Sharbat Gula.” Steve McCurry said “What helped me recognize the face are the green eyes of this Afghan girl.” Also he said, ” Her eyes are sea green. Thy are haunted and haunting, and in them you can read the tragedy of a land drained by war.”

And this video from National Geographic shows how Steve McCurry managed to relocate the Afghan girl again.

I was flipping through my magazines and I’ve found a magazine we’ve ordered a few months ago. It’s about Iran from the National Geography. There are articles about the abandoned architects in Iran and some geography of Iran.

National Geography magazines are really interesting because you get to learn a lot of things. I recommend this magazine to everyone. 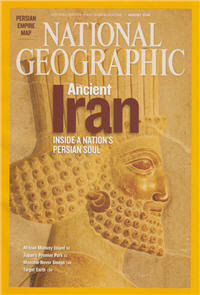 To those who love to read:

Here are some books that relates to the Middle East. Not only we have non-fiction books, fiction books are avaliable to read, too!

Not Without My Daughter by Betty Mahmoody

This book is about a woman with her husband and 4 years old daughter, Mahtob, visiting his family in Iran from the USA. However as they returned to America, Betty (the woman)’s husband, ‘Moody’ changed. In Iran, women were treated badly and Betty became treated the same.

Betty began to try to escape…but not without her daughter.

Princess: A True Story of Life Behind the Veil in Saudi Arabia by Jean P. Sasson

This book is about how a princess was treated like other women in Saudi Arabia even though she was from the Royal Family. Princess Sultana lived as if she was in a cage. She was only needed just to have children.

(This book may contain cruelties to women at that time.)

Shabanu: Daughter of the Wind by Suzanne Fisher Staples

Shabanu is an award-wining book and it’s about a girl whose marriage was already arranged by her father. She agreed just because it was her duty for the family. However, the encounter with another family had changed the marriage plans for her older sister and it was Shabanu who had to sacrifice herself and her dreams.

The sequel to Shabanu, this book is about after the girl had give birth to a daughter. Shabanu’s husband’s other wives are jealous of her and Shabanu was in a dangerous situation. She fled to haveli, but she was facing more dangers. A single girl on her own and only a friend there.

P.S. We hope you enjoy these books!

– We think that the standard for ideas and content are reasonable. We feel that we can make good grade for this section. We’ll do a lot of researches that connects with our lesson, and we’ll think deeply about that information that related to our topic about the Middle East. Also all of our tags are meaningful and related with our categories and we’ll try to comment of other’s post.

– We will try to upload much information that connects with our topic the Middle East as possible as we can and check this blog during our free time. Also we will upload 3-4 posts every week to get good score for this section.

– We will use the spell and grammar check tool in words document people we publish and upload our posts and we think that we can do well in this section because our blog is written in the point of view of the journey in to the Middle East.

– We will add and link many others’ blog on our blog roll and we’ll write comments on others’ blog after we read others’ posts.

Helen: I would like to visit Dubai because it’s a beautiful city and there are a lot of shopping malls (I love shopping! 😀 ). It’s also one of the place to visit when traveling to the Middle East.

Hanjoo: I want to visit Dubai because it’s a beautiful city. I agree with Helen, too!

This video is about Dubai World Island from YouTube.

To Everyone who wants to Know Something About Dubai:

The famous World Islands in Dubai was man-made. They are indeed beautiful, but with the islands that geographically don’t belong there, will the environment change from the cause of the human activities? And will this also relate to the change of climate and global warming?

Normally, islands form over many years. If man made islands start to appear, the ocean environment might change due to the load of sand added into the sea. Fish’s homes might be damaged for islands may change the ocean currents or the temperture of sea water.

Even though the World Islands may give humans a better entertainment place, but I think people should also concider the environment when building these kind of things. 🙂

(What do you know about Middle East?)

Hanjoo: The weather is really hot and have many deserts. Middle East is famous for oil production. There are also wars/conflicts/kidnapping/terror. There are also a lot of natural resources.

Helen: There are a lot of deserts. Produces a lot of oil.

(What do you assume?)

Hanjoo: Apartheid had happened. The are three main religiouns in Middle East. They might use child labor.

Helen: Some countries are poor. More wars happened there than other places.

Hanjoo: what cause the wars or conflicts in M.E. and what kind of governments are in the countries.

Helen: the culture of different countries and different landforms. Hello! This is gonna be the first post by Helen and Hanjoo.

We’re currently learning about the Middle East in Humanities class and we are going to share some ideas here in our blog!

Welcome to your brand new blog!

This is a sidebar and can be changed in Widgets in your dashboard.

You can also modify number of sidebars in theme options!